“Finished. Not perfect.” Seems like I am being lazy by just finishing something even if it’s not perfect, right? Let me explain. 2017 was my year of embracing Shai LaBeouf. No, not freestyle rapping with no shirt on or protesting in the streets of New York. Remember his infamous green screen wig out? Screaming “Just! Do it!” Or that whole Nike slogan, whatever. Artists and creatives suffer from crippling self-doubt, habitually beating themselves up for never being good enough. This sometimes leads to an endless supply of projects that are never completed because they aren’t “perfect”. Imposter syndrome was keeping me from moving forward. 2017 was the year of moving out of my comfort zone and just finishing things, anything, everything…even if they weren’t perfect.

January rolled around and I was reaching my limit of how much more I could withstand in the little puddle of my slowly wasting away life I was wallowing in. Utterly depressed, I was becoming physically ill from my office job. More and more frustrated at how I felt every day, I knew I had to make a change. I was going to quit my job. That was it. It couldn’t be any worse than wanting to down a bottle of vodka at lunch every day just to make it through another ice breaker or story about my co-worker’s childbirth. I hate babies and kids FYI. My plan was vague but it was a plan and I wasn’t going to back out. I couldn’t. I saved my money, updated my resume, put in countless hours hustling for a better opportunity and just hunkered down until the time was right. I could conjure up the whole book series about how bad my last job was. It did, however, afford me a lot of opportunities to advance my skills and learn what I hated. I owed them nothing but I understand what respect is. I gave myself 6 months to get my shit together.

May was here and I was about to lay waste to everyone in my way. Every day the anxiety and sheer chaos from my office job made my body hate me. Job outlooks were so depressing I felt I was doomed. I made a phone call to one of the most epic people I know, Frank over at Thingergy Inc, who I had been doing work for on and off for a little while. Everything changed in that one simple phone call. I put my notice in at the soul-sucking office job shortly after. That phone call…changed my life. It changed everything.

There was no turning back now.

August I had the biggest job I have ever had, literally and figuratively with Thingergy which almost broke me but it was finished. I saw it in person. I almost cried. I’ll never be able to share it with you. Go nuts on what you might think it is…

November hit hard and I had officially formed my business into Wartooth Designs LLC. That fancy bit on the end makes me legit. There was REALLY no turning back now. I finished what I set out to do. I continue to do that in everything I have done this year. I stopped hesitating. Hesitation is an opportunity lost. I went for it. I started making decisions and following through with them not thinking about what others might think or how they would react. I was owning my actions. I created without fear. Without anything standing in my way.

2017 was the year I made things happen. It wasn’t always pretty and I failed more than I ever want to think about. I learned something every time I screwed something up. I learned every time I finished something and it wasn’t perfect. I learned how to fix it for the better next time. I was never going to improve if I never actually did anything. I made coloring books, I created sculptures, I wrote blogs, I streamed live on Twitch. I did it. These projects will continue to evolve. They are starting points. Everything that you do is a starting point even if its a “finished piece”. The next one will be better…and the next one after that…and after that.

I am late posting this. Again, it’s finished. Not perfect.

Saying “NO”. Why It’s Important to Creative People. 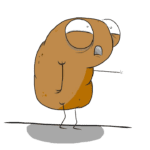